Scuba diving in general had been on my bucket list, and I couldn’t think of a better place to experience it other than in Thailand in their crystal blue water in the Andaman Coast.  Sure, the Great Barrier Reef or ones in the Caribbean may be just as nice, but it’s hard to top Thailand for a first time.  General rule of thumb is at least 24hrs before and after diving are you allowed to fly; this made the planning a bit difficult to include in our Phuket itinerary.  We didn’t arrive into Phuket International Airport until around 11pm, and arrived at our hotel in the Patong Beach area, the Dusit2 Phuket Resort around midnight in a drenching downpour.  The result: 1 night stay in Phuket Patong Beach area and 2 nights stay in Koh Phi Phi Island.

Our initial plan was to take the morning ferry (08:30am) to Koh Phi Phi where we would be staying at the Holiday Inn Resort Phi Phi Island– which is located on the other side of Tonsei Pier, another 45mins ferry trip.  But arriving late last night and having slept in, and so the plan got changed.  With the help of the concierge staff, we secured a private transportation for 3 hours (approximately 300baht/hr); where we got to ride on elephants in a little sanctuary up in the mountain, and then take an atv up to the Giant Buddha in Phuket.  We still had time to check out a Chinese shop selling crows’ nest (bloody expensive), we instead had lunch at a seaside restaurant nearby Ratsada Pier. Our total cost from 9:30am – 1:00pm for the transportation was 900 (1000baht with our tip).  I highly recommend doing this as opposed to the group tours offered where passengers and corralled together (We were done the elephant trekking before the groups even arrived (despite departing 30mins – an hour earlier than us).

The ferry itself ride is about 2 hours, we took the Andaman Sea Ferry as that stops just outside our resort on Laemtong Beach and was recommended by hotel staff.  So we didn’t arrive to the resort until around 4pm, with the night just for adjusting to the resort, having a beach-side dinner and watching the sunset.  Oh yeah, also filled up all our forms at the scuba diving center; so we would be ready for our morning diving trip the next day at 9am.  The resort itself was very interesting indeed.  Instead of rooms in a single building, each room is a separate bungalow style studio.  We were upgraded to a Coral Sea-view Bungalow from a Garden-view one, the only downside other than the view was the distance to the main resort amenities despite only being steps from the beach.  Can’t forget the most amazing way of reaching the resort on the secluded part of Phi Phi Don.  From the ferry, we hopped on to a longtail boat to reach near the shore of the resort, we then transferred onto a tractor with a wagon through the shallow water, and disembarked on a movable ramp placed in the sand- what an entrance!

So the main purpose of coming to Phi Phi Islands was the diving, but the scenery, the sandy beach, clear blue waters, and amazing sunrise/set made the stay more memorable.  I swear it was the limestone purging out of the sea that sold us to visit there.  Also a sight to behold was the change of tides, in the morning the water was deep, but in the afternoon, all the water had receded out.  That morning, just lounging on the beach in a hammock and stepping into the water was probably the most refreshing thing I’ve done in a long time (and I don’t like the taste of the salt sea water but I survived!).  We were then picked up beach-side by our scuba instructor named “C” which is short for his name (It must have been really long and hard to pronounce) and with two crew members that helped prep the equipment, we set off via speedboat to Phi Phi Lae and Loh Samah Bay where our 2 morning dives would take place.  It was also my first time on a speedboat, we were thinking of taking it from Phuket, but the price was just not viable, so luckily here we were able to ride one, which took about 15-20mins each way.  The pounding of the waves, feeling your butt jump up and down, wow! 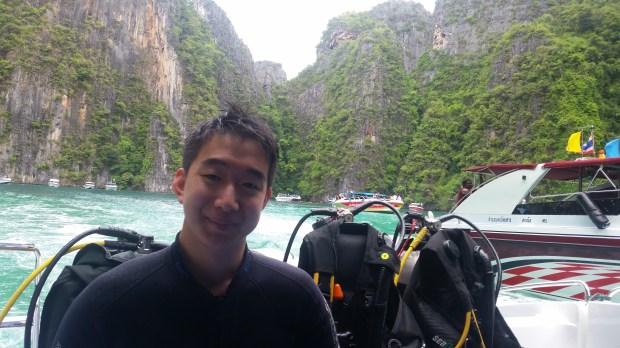 After some instructions with the equipment, breathing techniques, equalizing techniques, and hand signals, we leaped into the turquoise sea.  After awhile we were acclimated to the pressure and depths of around 15 meters.  Swimming around was quite challenging, I would always slowly float gradually and wasn’t really able to keep swimming down and sometimes even getting kicked in the face by the flipper.  I’ve always been fascinated with marine life, fishes, sharks, turtles, etc. and also to witness the corals under the sea was truly amazing.  Playing with the clown fishes in the corals, to even seeing one of those big eels hiding and so many other types of fishes.  It was like being in an aquarium exhibit truly worth every baht.  The total for the two of us was 10,000THB, so about $330 for two people, two dives.  Oh yeah, we oped out of the photos, they wanted 3000THB for them.