After just coming back from Chicago, I may have to say that it may be my second favourite U.S city after San Francisco. Mainly because I am simply amazed by the skyline, whether it is the view from the south (Adler Planetarium) or the north (Lincoln Park) or from Lake Michigan. It is also a very tourist-friendly city which is very accessible by public transit, on foot, and on bike. I am not much of a shopper, but there’s also shopping opportunities everywhere, and ofcourse, so many culinary choices to satisfy any craving you may have. 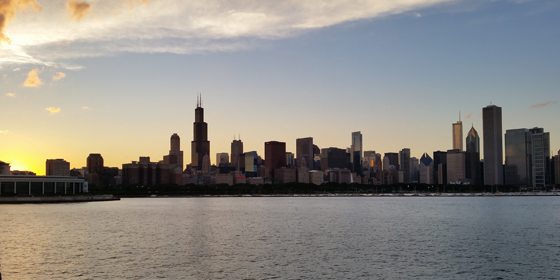 This time around, I had a lot more time to spend and enjoy Chicago more on a leisurely pace rather than my previous 2-day trip; including the Labour Day weekend from Friday night to Tuesday morning- so I had 3 whole days to spend in Chicago. The planning process followed my usual trip planning which included the budget and schedule itinerary broken down for each day.  If you would like to see an example, feel free to leave a message or email.

During the planning stage for flights, the idea was to book a Friday night flight and return on Tuesday morning.  Porter offers flights to Chicago Midway International Airport from downtown Toronto, whereas AC, AA, UA fly from Pearson International to Chicago O’hare. Since I was meeting my friend who was flying in from LAX to ORD, I decided for us to meet at the airport or nearby hotel.  The return flight for Tuesday morning was to allow me to arrive at work for 10am from the island airport with Porter.  I used my AMEX Membership Rewards points (4,500) to transfer to Avios (British Airways) to purchase a one-way flight from YYZ-ORD with American Airlines.  The tax came out to about $55 and the 4,500 points- a huge savings compared to Aeroplan 12,500 miles + $120 tax. The return flight, I took advantage of Porter’s 60% sale with the return fare coming just under $100.

Looking around the numerous hotel options around O’Hare International Airport, my first choice was to stay with an IHG property for their reward points.  There was the Holiday Inn Express, or Holiday Inn Suites, and the Intercontinental.  Obviously, for the similar price, I chose the Intercontinental, so it was booked for the Friday night at $70/night, with free 24hr shuttle from the airport to the hotel (this would come in hand since my friend’s flight was delayed and arrived at 3am). I later received an email notifying me of the change of ownership/management from the hotel and that it had changed to a Loews property- Loews Chicago O’Hare Hotel.  The hotel is also a short 5 minute walk to the new Fashion Outlets of Chicago shopping complex.  My Tripadvisor review here: www.tripadvisor.com

The remaining 3 nights was at the Swissotel Chicago, having already stayed at the Fairmont Millennium Park last time, the Saturday night was the hardest to secure at the lowest-rate.  Other options included several Starwood properties like the Westin and W Chicago City Center.  The Swissotel property in Chicago is the only one in America under the brand, with more locations in Europe and Middle East.  It was just another 3 minute walk more from Millennium Park to the hotel compared to the Fairmont.  This property offered amazing panoramic views from the 42nd floor (the perfect place indoors to watch the Navy Pier fireworks).  The rate for the 3 nights: $79/night.  My Tripadvisor review here: www.tripadvisor.com