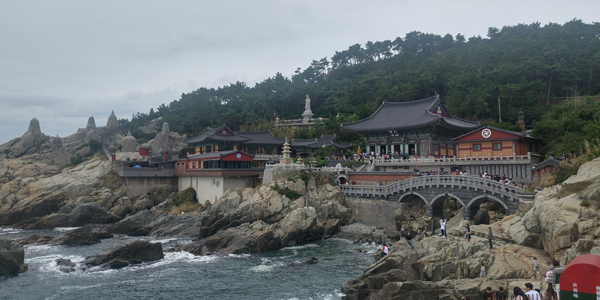 Haedong Yonggung Temple (해동 용궁사) is a Buddhist temple located beautifully set on the seaside in the eastern part of the city of Busan, near Haeundae-gu (해운대구), in Gijang-gu (기장구), an area known for its beaches and seafood, and recently cafes as well as the Lotte Premium Outlets nearby.

How to get there?
Address
86, Yonggung-gil, Gijang-eup, Gijang-gun, Busan
부산광역시 기장군 기장읍 용궁길 86
It’s about a hour bus ride from central Busan and about 30 minutes from Haeundae Beach (depending on traffic). The most direct bus routes are 100 and 181 (the bus stop is just outside exit 7 at Haeundae Station Line 2), as they both go through Haeundae Beach area and Songjeong Beach areas. Another way is to take the subway or in this case the above-ground train, the Donghae Commuter Line (part of the Busan Metro) and get off at OSIRIA Station (K122 stop). From there, it’s about a 15 minute walk to the entrance of the temple or can take bus number 139 (the bus stop is just outside exit 1). The train option can be quicker if there’s road traffic, however, it costs a bit more than the bus, and the train frequency is 30 minutes during off-peak hours, 20 minutes during peak hours. Another option is taxi, which depending on traffic will be around 10,000won, but with traffic especially on the weekend, will be much more expensive.

What makes it special?
For me, being situated on the shoreline on a small cliff is what makes it special. Most temples in Korea are in mountains, but this one looks east over the ocean, perfect for witnessing the sunrise. Another good time to visit is during the cherry blossoms in the spring and during the birth of Buddha, usually celebrated on the fourth month of the lunar calendar (a national holiday so expect huge crowds). 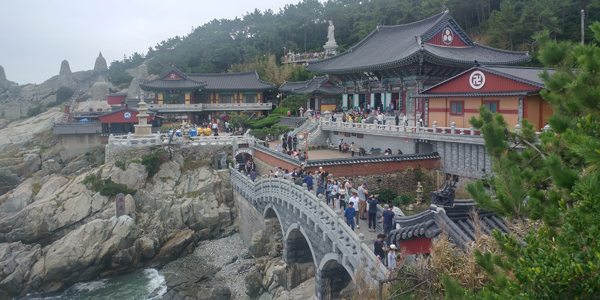