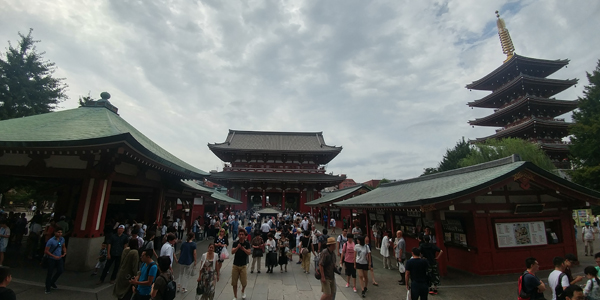 Sensoji (浅草寺, Sensōji, also known as Asakusa Kannon Temple) is a Buddhist temple located in the Asakusa district of Tokyo. It is one of Tokyo’s most colorful and popular temples. The temple was completed in 645, making it Tokyo’s oldest temple. Sensō-ji is the focus of Tokyo’s largest and most popular festival, Sanja Matsuri. This takes place over 3–4 days in late spring. Easily accessible by subway, Sensoji Temple is a few steps from Asakusa Station, served by the Ginza Subway Line, Asakusa Subway Line and Tobu Railways. Head for the A4 Exit of the Toei Asakusa Line, or Exit 1, 2 and 3 of the Tokyo Metro Ginza Line. It is a 5-minute walk to Sensoji. The main hall is opened from 6:00am to 5:00pm, opens year round and free admission. 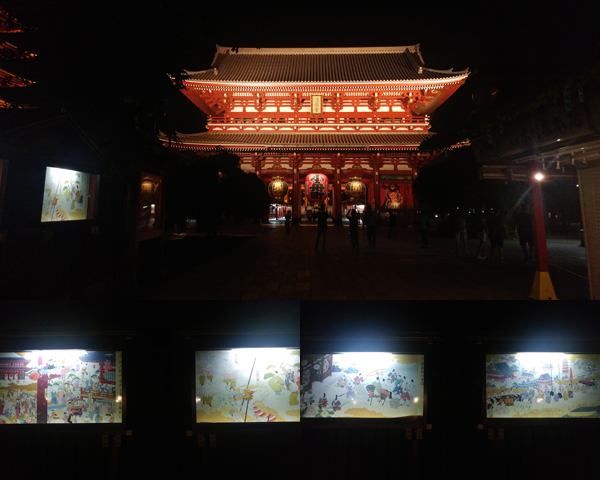 When approaching the temple, visitors first enter through the Kaminarimon (Thunder Gate). This imposing Buddhist structure features a massive paper lantern dramatically painted in vivid red-and-black tones to suggest thunderclouds and lightning. A shopping street of over 200 meters, called Nakamise, leads from the outer gate to the temple’s second gate, the Hozomon. An illustration window in Sensoji of how the two fishermen brothers find bosatsu Kannon statuette in Sumida River. 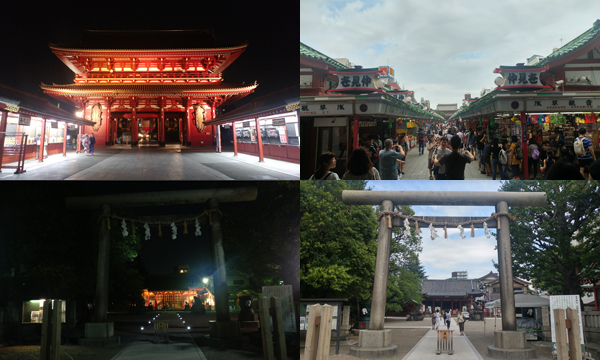 The approach to Sensoji, known as Nakamise Dori, is lined with about a hundred shops selling crafts, souvenirs and plenty of sweet and savory snacks. Alongside typical Japanese souvenirs such as yukata and folding fans, various traditional local snacks from the Asakusa area are sold along the Nakamise. The shopping street has a history of several centuries. Within the temple grounds are multiple shrines and a five story pagoda and a quiet contemplative garden kept in the distinctive Japanese style. 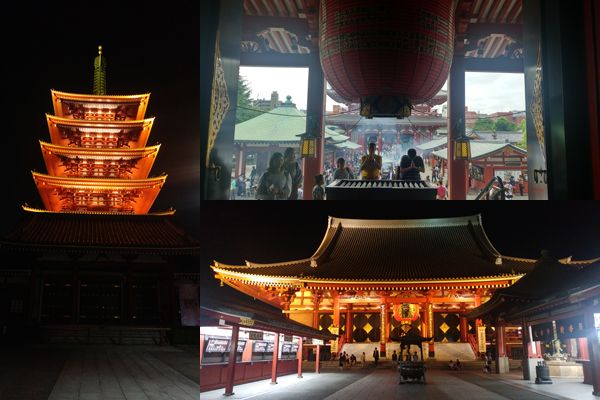 Having an affinity to traditional temples in Asia, Tokyo isn’t really known for such sights compared to Kyoto, but by visiting the Senso-ji Temple makes you feel you are not in the bustle and busy of such a large metropolitan city. The crowds during the morning and day is always busy and is intriguing to see Japanese and foreigners participate in the activities within the grounds. I did appreciate visiting again at night and was able to capture more photos in a less crowded environment.