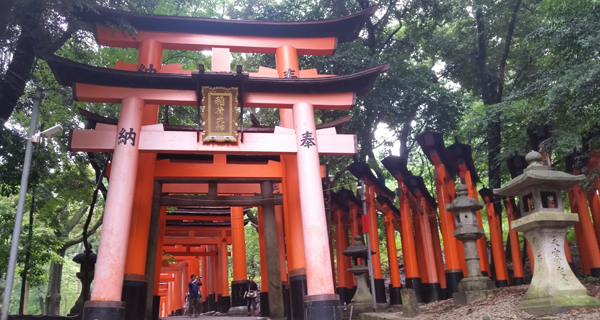 Fushimi Inari-Taisha is an important Shinto shrine, the head shrine of the God ‘Inari’ who is the God of Rice. Foxes are thought to be Inari’s messengers, resulting in many fox statues across the shrine grounds. Fushimi Inari Shrine has ancient origins, predating the capital’s move to Kyoto in 794.  The shrine sits at the base of the 233m Inari Mountain.

This sight had long been on my go to list during my first visit to Kyoto. Luckily, it was quite close to Kyoto Station and easily accessible using my JR West Kansai Area rail pass, I ventured out in the morning. The short walk from the station to the entrance was lined with stalls, yet to open, by the time I arrive around 9am. I was then greeted with a large red torii gate at the entrance of the shrine grounds.  There were more school students than tourists at the time. Amongst the shrine ground, are a number of buildings including the main hall (Honden) and other traditional Shinto shrines where individuals can pay respects to the Gods.

The walk up is around 2.5 miles, and takes approximately 2 – 3 hours to complete.  There are thousands upon thousands of these red gates, in reality, there are around 32,000 in total, all donated by the way. Along the way, there are multiple smaller shrines with stacks of miniature torii gates that were donated by visitors with smaller budgets.  You will also notice many fox sculptures within the grounds and along the trail.  Foxes, also known in Japan as Kitsune, were known to be the Inari God’s messengers and can be seen with jewels or keys in their mouth.

How to get there:
The Fushimi Inari-Taisha is located just outside JR Inari Station, the second station from Kyoto Station along the JR Nara Line (5 minutes, 140 yen one way from Kyoto Station, not served by rapid trains). The shrine can also be reached in a short walk from Fushimi Inari Station along the Keihan Main Line. There is no entrance fee, and is open 24hours.